Nick: I’ve always loved pointlessly dangerous adventures. I grew up riding Radio Flier wagons down my (very steep) driveway, jumping off of tall rocks into rivers, and dragging sleds around my backyard with an ATV. Since graduating from Berkeley last Spring after studying bioengineering with minors in electrical engineering and computer science, I’ve been splitting my time between computer programming and climbing really tall rocks throughout the Sierra Nevadas. The PCT will be a nice break from the life of a city-dwelling computer nerd. I’ll get to give my brain a break and spend more time doing what I love, wearing my wilderness onesie. 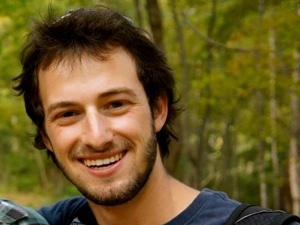 Gabe: Growing up surrounded by redwood forests along the Pacific North Coast in Arcata, California, Gabe spent four years on the East Coast and graduated from Williams College in 2013. As a geology and physics double major, he researched glaciology and classical mechanics, completing an honors thesis on the disappearance of permafrost in the Front Range of Colorado. As vice president of the Williams Outing Club, Gabe has extensive experience leading adventures in backpacking, backcountry skiing, canoeing and snowshoeing in addition to teaching kayaking and skiing P.E. classes. He was also involved with tutoring and mentoring local high school students in physics, math and chemistry throughout his four years in college. During his studies abroad in Christchurch, New Zealand, Gabe studied atmospheric fluid dynamics and field geology in addition to finding time to ski, kayak, surf, rock climb and backpack. Always striving to balance his educational aspirations and nature, Gabe led backpacking and sea kayaking trips for Overland in Alaska last summer. After completing the PCT, Gabe will be studying for his PhD at Dartmouth College’s Earth and Space Science’s program.

Nick and Gabe first met when Nick transferred to Jacoby Creek Elementary School in the 4th grade. They had many classes together through elementary, middle, and high school, played JV soccer together their freshman and sophomore years, and competed in many math competitions instead of partying on weekends. They traveled to Germany together after high school, and met up in Australia for a week of backpacking while they were both studying abroad in 2012.